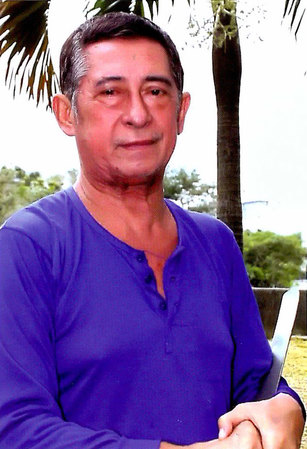 In his early youth, Master Tony Diego used to observe the training method of the siblings of Islaw Romo, one of the best and famous Eskrimador in Pasil, Cebu. He watched with interest as they trained with the rest of Islaw Romo's fighters. Because he lived not far away, Tony Diego's playmates were the grandchildren of the revered Eskrimador, who even in their early years were adept in the art of the sword. Their favorite game was to imitate the fighting techniques of Islaw Romo as he untiringly taught the other masters, such as Pedring Romo, Carlito Romo, Casio Labuntog, Carling Cabasa, Timor Maranga, Manoy Biro, Atty, Toribio Rodel and Roque Banahaw Abellar, to name a few.

When Master Tony moved to Manila, he trained in the Balintawak style of Arnis with the Eskrimadors from Cebu while he was working at the docks and at the same time training with Berting Presas (Modern Arnis) in Quiapo, a dictrict of Manila.
Soon after, he met Antonio "Tatang" Ilustrisimo in 1974. Tatang's simple but ferocious style greatky impressed him. He then requested Tatang to teach him. At first Tatang would not teach Master Tony, explaining that it was only for his use alone! He said he remaineed undefeated because others do not know his style. Master Tony, far from being deterred, relentlessly pestered Tatang with attention and gifts until the old man finally agreed to teach him the ways of the blade. Compared with Tatang, Master Tony teaches almost the same way with exception that he has structured his intruction procedures into sets of techniques which make learning easier. This comes from having seen it from the student's point of view.
What is it like to train with the MASTER OF KALIS ILUSTRISIMO 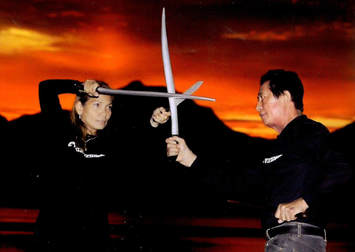 I first met Master Tony Diego when i joined Bakbakan International in 1989. He was friend of Christopher Ricketts, the master of Bakbakan. and was invited frequently to our practise sessions, to teach the students of Bakbakan his style of sword and knife fighting.
When Master Topher left for the States for good in 2000, i started training with Master Tony on regular basis with his Binondo Kalis Ilustrisimo group, where my training took on a new leap. I was showed the comfortable way to hold the blade, not to grip handle too tight, to prevent it from being disarmed when struck heavily by an opponent's sword. I was then taught the different kinds and forms of striking and blocking, the footwork and stances that go for each attack and counter attack. I was asked to repeatedly execute a particular strike before moving on to the next. Master Tony has always reiterated the importance of a repetitive exercise for one to gain mastery of the form.

Soon enough Master Tony taught me how to use the sword and knife at the same time. This style is called Punta y Daga. From this style, my interest grew more and more and i always look forward to a sword play with Master Tony, where my speed and accuracy to block and strike are put a test, and my distance and movements, checked and corrected.
There are moments when Master Tony would attack me when my guard is down to see how i react to it. If i froze or failed to react, he would tell me not to think but just to react, otherwise i would get hit. The word "sorry" is never used in the gym. If you get hit, it's your fault.

Training with Master Tony is not easy. I often find myself catching my breath during the swordpaly, while Master Tony is laughing and comfortably attacking and parrying my strikes. At the edn of each session, i am totally exhausted. My shoulders ache and i can hardly lift my arms. At home before going to bed, i would take a muscle relaxant to relieve the pain so i could train again in next session.
As i continue my training with Master Tony, i am learning not only the art of bladed weapons but also, the essence of a good swordmanship, the discipline and commitment that one must have to the art.

Christened as Antonio Ramoneda Diego Maestro, Mang Tony as he prefers to be called has truly lived up to his name, a "maestro" in bladed weapons...a master by name and by heart.